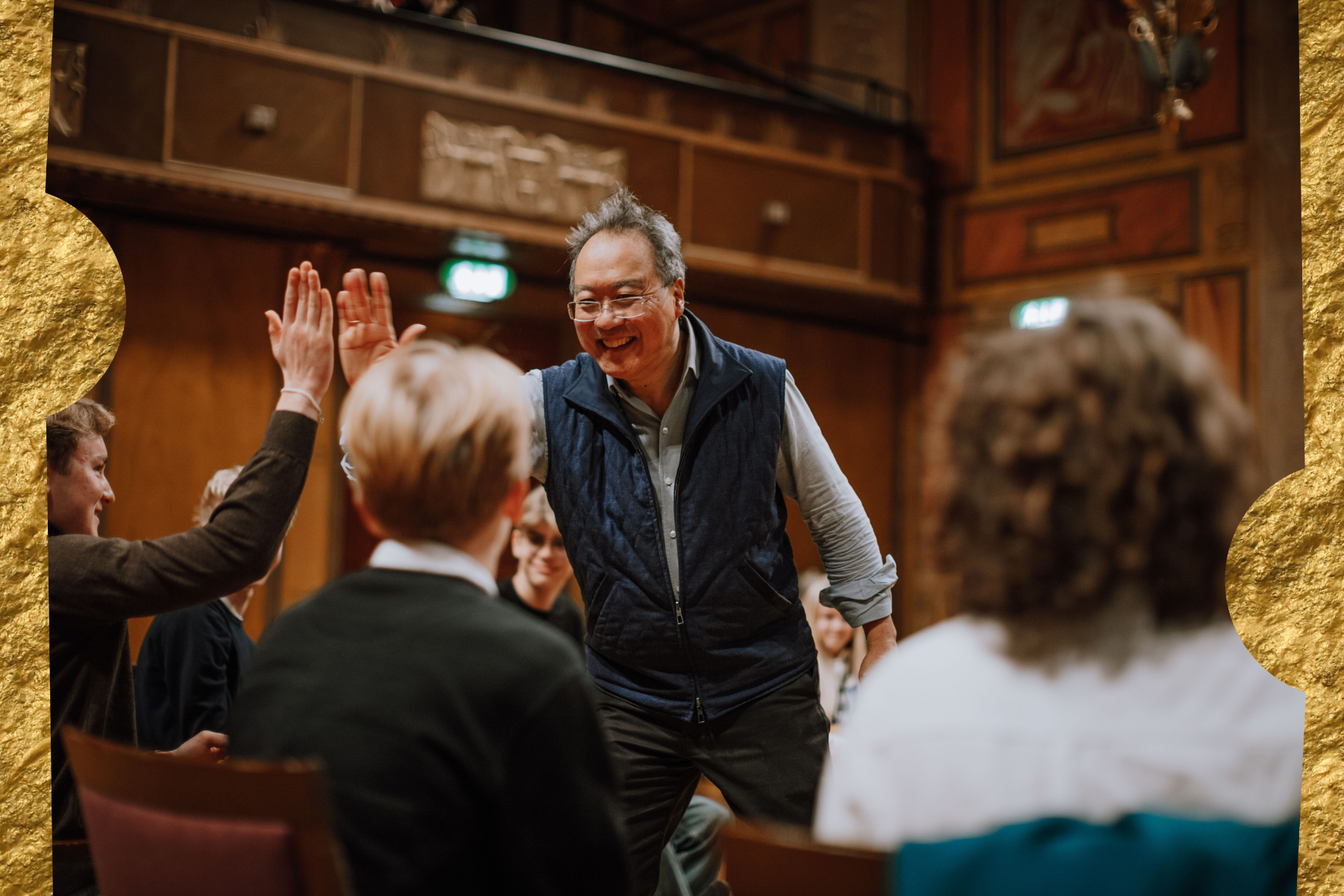 October 18 cellist Yo-Yo Ma will receive the 2022 Birgit Nilsson Prize. On the occasion of his visit to Sweden a group of young cellists from various cultural schools across Sweden had the opportunity to meet the world star. They also attended the rehearsal and concert at Konserthuset Stockholm where Yo-Yo Ma performed Dvořák’s Cello Concerto. The young cellists were invited from all over Sweden to meet a role model that was just as interested in them as they were in him.

Which one of you plays hockey?! That’s how Yo-Yo Ma starts this meeting with ten young Swedish cellists. He shows genuin interest in his crowd, which is good as they are a bit shy – at first.

Yo-Yo Ma gets questions on how much he practice (“I don’t like to practice”), why he chose the cello (“It was the biggest instrument I could get”) and how he tackles a new piece that he finds difficult (“I look at the piece as if it’s a murder mystery that needs to be solved”). He then reminds the young cellists that music is all around. If one gets tired of practicing one can go out into the nature and be surrounded by other, inspiring sounds. What sounds are around you in your home, he asks? One boy starts making a ticking sound and soon the entire group, with Ma as their conductor, makes music together.

This was very exciting and fun. The conversation with Yo-Yo Ma gave us all a push forward, and from now it will actually be interesting to practice. I also had the best time at the concert – I laughed a lot, surprisingly, says Tyra-Lovisa Sigmond, one of the ten young cellists.

We look forward to welcoming these young talents to a personal meeting with one of the world’s foremost artists in classical music, says Susanne Rydén, President of the Birgit Nilsson Foundation. Yo-Yo Ma’s tremendous drive to foster community and learn from each other through music is a great inspiration for the next generation of musicians. In this way, we also want to highlight the Kulturskolan’s important role in the re-growth of Swedish musical life.

Cellist Yo-Yo Ma has a great commitment to young musicians, something that is also important to the Birgit Nilsson Foundation, as well as to the Royal Swedish Academy of Music to which the foundation is closely connected.