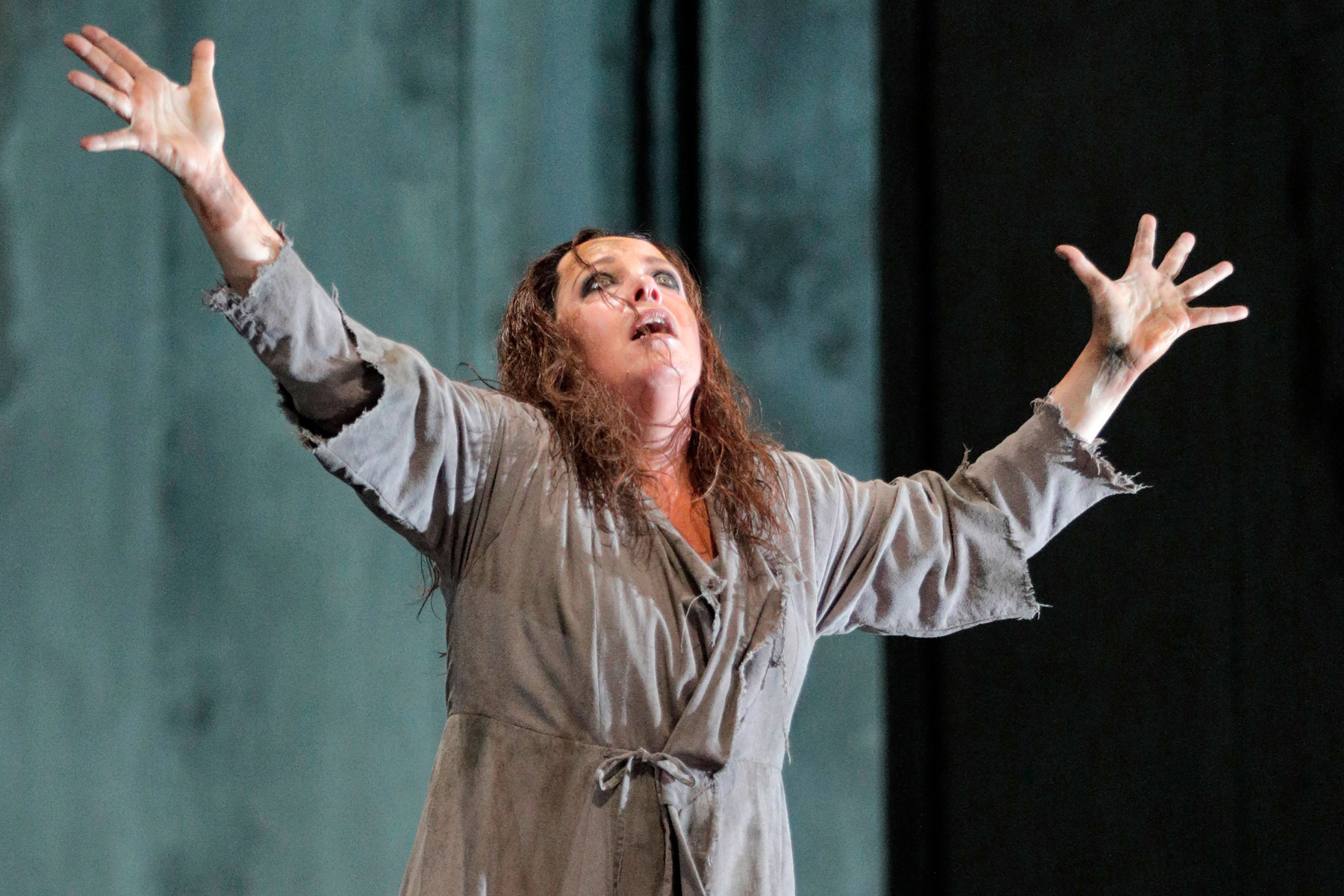 Superstar soprano, recipient of the Birgit Nilsson Prize, says an early competition she lost proved to be an unexpected gift.

By Dennis Polkow
By this point in soprano Nina Stemme’s operatic journey, the high-intensity role of Richard Strauss’ “Elektra” has emerged as a signature piece. Indeed, the Swedish singer and reigning Wagnerian soprano, who currently performs the distraught and vengeful Elektra in her debut with the Lyric Opera of Chicago, all but owns the part. She is the foremost Elektra in the world today, and she embraces the staggeringly difficult role as “the greatest joy” to sing.

Stemme is one of the world’s great dramatic sopranos. (Neda Navaee)

“The opera is exciting,” she exclaims, as if tossing aside all the demands. “It’s very intense. It’s short. No intermission. It’s captivating, so impulsive as a piece of work. Elektra is not only dramatic, she’s also very introverted and lyrical and (filled with) all these nuances. And it’s such a privilege to be able to perform here with this orchestra and with Donald Runnicles conducting. (Runnicles is also making his Lyric debut.) We’ve worked a lot together.”

The David McVicar production is new to Stemme, though it has been performed in Chicago before when it premiered at Lyric in 2012.

“But that’s also good, because it means that everything is already prepared in a good way,” she says. “Almost. Things happen in rehearsals.” A knee accident slightly limited her movement on opening night. “Knock wood.”

Lyric general director Anthony Freud says he’d been trying to lure Stemme to Chicago from Day One of his appointment here in 2011.

“She and I go back a long way and she is an artist I have admired for decades,” says Freud. “I actually first heard her when she was a finalist in the BBC Cardiff Singer of the World Competition. I’m not sure any of us in the audience that day would have thought that one day she would move into the repertoire that she has specialized in, the dramatic soprano German repertoire.”

“It is true,” the Swedish superstar soprano admits, settling in comfortably in a backstage Lyric Opera office, clutching a steaming coffee mug and elegantly dressed in brown suede and scarf with high fur-fringed boots suitable for a Chicago – or a Stockholm – subzero day. “I was a big lyric soprano at that time. That was 1993. I sang Mimi and Debussy [at Cardiff].”

The proof can be heard on YouTube, where it is clear Stemme had a radiant voice for that repertoire. So why the shift from lyric soprano to dramatic soprano?

“It really wasn’t a shift, but a journey,” she explains. “I got offered to sing ‘Madama Butterfly’ quite early and as soon as people could hear that I had conquered that role at all, they started to ask me about things like Isolde. But that was far too early. I actually thank everyone on the board of the Cardiff Singer of the World who did not let me win!” She is serious: “This was absolutely the right thing for me. It gave me time to develop.”

Twenty-five years later, Stemme made headlines in May 2018 when it was announced that she was the Birgit Nilsson Centennial recipient of the million-dollar Birgit Nilsson Prize, named after the great Swedish Wagnerian soprano of the mid-20th century. In winning, Stemme joins a very select group that includes tenor Plácido Domingo (2009) – chosen as the first recipient by Nilsson herself before her death in 2005 – conductor and Chicago Symphony Orchestra music director Riccardo Muti (2011), and the Vienna Philharmonic (2014). Stemme is only the second singer to win the Nilsson Prize thus far.

“Of course, when I found about it, it was over a year before the actual ceremony,” Stemme recalls. “So, I had to keep it to myself and my family, and I could hardly believe it. I almost didn’t want to believe it because I thought: Wow! I hear about writers receiving the Nobel Prize in Literature who then stop writing. What if I stop singing? So, I had a little crisis, I’ll tell you. I don’t think anyone found out about it except my closest family, but I was thinking about it every single day. It’s such a big thing and I had not at all counted on it. It’s just little me.”

The symbolism is powerful that in the year of the Birgit Nilsson Centennial, it was Stemme, another Swedish soprano doing Nilsson’s repertoire, who was chosen. Stemme is fully aware of the weight of this comparison. “I’m a product of my generation of operagoers and opera singers, so we are different. And I want, of course, my profile, my personality to come through. But as Mahler said, ‘My time will come’‒ I am more than happy to give tribute to Birgit Nilsson because I am so happy that her memory is still alive, her art.”

Indeed, there is no shortage of media available on Nilsson, particularly since last year’s centennial. There is a newly released 90-minute documentary “Birgit Nilsson: In a League of Our Own” that includes archival performance footage and interviews as well as new appreciations, including from Stemme herself. The massive 712-page “Birgit Nilsson – A Homage” includes reviews, essays and performance photos across Nilsson’s nearly 40-year career. And a 31-CD set, “Birgit Nilsson: The Great Live Recordings” on Sony Classical, includes never-before-released live recordings of performances also spanning Nilsson’s career.

That set is particularly illuminating for those who, like Stemme, never had a chance to hear Nilsson perform live. Unlike commercial recordings which tended to place microphones too close to Nilsson, the more distant recorded sound is far truer to what Nilsson sounded like in opera houses. Says Stemme, “I am always so surprised how youthful her voice sounded and how beautiful, especially at her prime.”

Stemme is often called a protégé of Nilsson, but their relationship was more complicated than that label might suggest. “She looked at me as a colleague rather than as her being a mentor,” says Stemme, “although I could use her as a mentor if I had any questions. She was always very open, very generous. I think she knew intuitively that every singer has to do it his or her own way. Sometimes when I exposed a weakness, I would say, ‘Oh, I think it’s very difficult to hold a steady piano tone.’ And she would say ‘Well,’ (in a wicked mimic of Nilsson’s speaking voice) ‘maybe it could be the support.’”

Stemme’s early musical journey was hardly conventional. She and her two sisters were each taught the piano and an ensemble instrument. “First, the violin for me,” she recalls, “but then the viola when I was big enough, because I liked the mellow sound of that. And I played quite a bit until I realized that maybe this is not it – for me, anyway. So, I cancelled my audition to the Conservatory in Stockholm on the very day of the audition.”

The young Stemme did sing in choruses. During a year as a high school foreign-exchange student, which brought her to Virginia, she took some voice lessons because she got a sore throat every time she sang. “I tried to keep the voice to myself because I was scared to death it would be heard,” she says. “I thought I had a pretty ugly voice. And then I realized, ‘Hm, it shouldn’t hurt this much.’ So I took voice lessons and then I realized that you just don’t ‘take’ voice lessons like that, because it has to be the right person. I wasn’t really interested in singing solo. I just wanted to fix my instrument.”