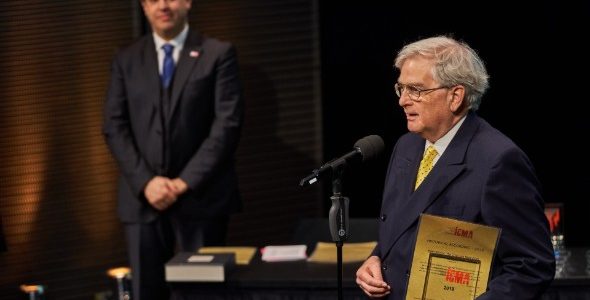 Rutbert Reisch travelled to Switzerland on 10 May to receive the International Classical Music Award (ICMA) for Best Historical Recording of the Year, which was awarded to Birgit Nilsson: The Great Live Recordings at a ceremony in Lucerne’s KKL Concert Hall. The 31 CD live box set, which was curated by the Birgit Nilsson Foundation to celebrate the 100th anniversary in 2018, was released as a limited edition on Sony and sold out within months. On presenting the award, the ICMA Jury commented “For those who never saw her on stage, this box set is the closest we come to experiencing such a miracle, and the best possible tribute to one of the great sopranos of the 20th century.” Read ICMA’s interview with Rutbert Reisch about Birgit Nilsson and her extraordinary legacy: https://www.icma-info.com/keeping-alive-nilssons-heritage-the-mission-of-rutbert-reisch/