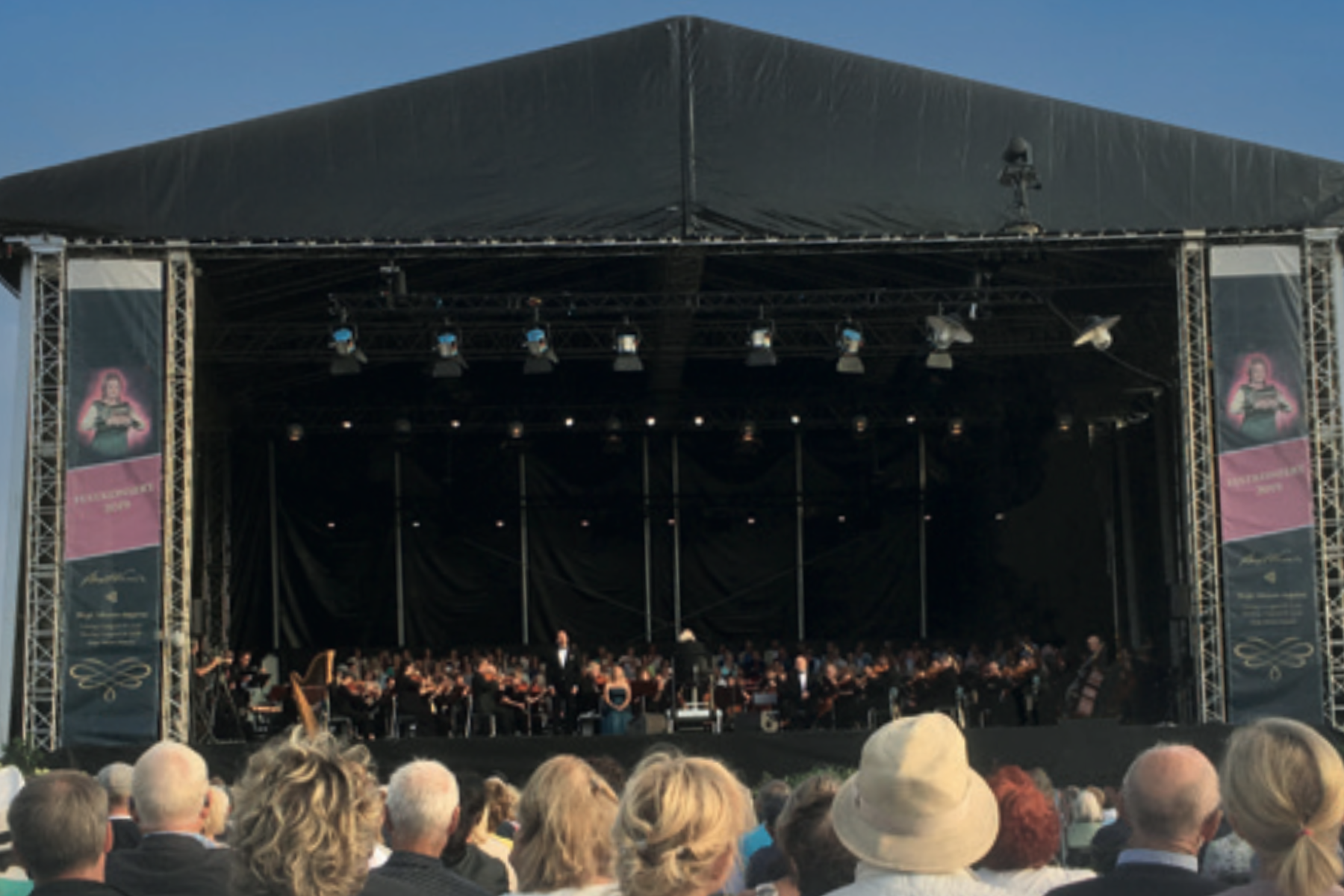 An opera gala presenting over one hundred performers, including international star soloists and guest speaker, Mark Levengood, will be the highlight and finale of this year’s Birgit Nilsson Days. The 13 August concert takes place on a large outdoor stage at the Birgit Nilsson Museum, in the meadow adjacent to Birgit’s family home.

Eight soloists will participate, including two young stars who perform for the first time in Scandinavia: soprano Joyce El-Khoury and tenor Jonathan Tetelman. “Joyce El-Khoury is miraculous, we have not heard anything like it since Callas”, according to France’s Opéra Magazine and Tetelman has been named “a complete star” by the New York Times.

The Birgit Nilsson Days (8-13 August, presented for the fifth year in a row) open with a public Master Class for promising opera singers led by court singer Hillevi Martinpelto and pianists, Elisabeth Boström and Jacob Lidåkra in the Birgit Nilsson Hall at Ravinen, Båstad. The course culminates in a concert on 11 August.

This year’s Birgit Nilsson Stipendium is awarded to the lyrical-dramatic soprano Cornelia Beskow, who receives her scholarship of SEK 200,000 on 12 August, and performs in recital at Västra Karup church, where Birgit herself sang for throughout her life.

And with the announcement of the cellist Yo-Yo Ma as the recipient of this year’s Birgit Nilsson Prize at the Birgit Nilsson Museum on May 17 – the singer’s birthday – her legacy has been linked even closer to her home region.

“There is no other place on earth that is more suitable for all this”, says Gitte Lindström-Harmark, CEO of Birgit Nilsson Museum and cousin to Birgit, who on June 28 opens the museum for the season with the theme “Birgit Nilsson – the dream, the passion and the legacy ”.

Joyce El-Khoury, soprano, was born in Berirut but grew up in Ottawa, Canada. After winning the George London Competition, she was linked to the Metropolitan Opera, where she debuted as Frasquita in Carmen. Of roles can be mentioned both Musetta and Mimì in La Bohème, Violetta in La Traviata which she sang at both Savonlinna Opera Festival, Royal Opera House in London and Glyndebourne Opera Festival, Tatjana in Eugen Onegin with Canadian Opera Company in Toronto, but also modern opera as Emmeline by Tobias Picker. On record, in addition to a solo album, she has recorded Donizetti’s Les Martyrs and Belisario. In June, Joyce El-Khoury participates in concert performances of the Un ballo di maschera  with the Chicago Symphony Orchestra under the direction of Riccardo Muti, who received the Birgit Nilsson Prize 2011.

Jonathan Tetelman, tenor, was born in Chile and grew up in the United States, where he studied at the Manhattan School of Music. In 2017, he won first prize in the New York Lyric Opera Competition. Since then, Jonathan Tetelmann has sung Rodolfo (La Bohème), Cavaradossi (Tosca), Pinkerton (La Bohème), as well as leading tenor roles in Francesca da Rimini by Zandonai, Verdi’s Stiffelio and most recently I due Foscari at the Maggio Musicale in Florence. His debut at the Royal Opera House Covent Garden was as Alfredo in La Traviata. Stages include Semperoper Dresden, Grand Teatro del Liceu in Barcelona, ​​Deutsche Oper Berlin, Opéra national du Rhin, Oper Frankfurt and Teatro Regio in Turin. In 2021, Jonathan Tetelmann signed an exclusive record contract with Deutsche Grammophon and his first solo album is up for release.

Elisabet Strid, soprano, is known for her Wagner and Straus interpretations and has established herself as one of Europe’s most sought-after lyrical-dramatic sopranos in roles such as Salome, Sieglinde, Senta, Elisabeth (Tannhäuser), Chrysothemis and Siegfried-Brünnhilde. She has visited the Bayreuth Festival, the Hong Kong Art Festival, the Teatro Real Madrid and the Chicago Lyric Opera. During the 2021/22 season, she made her debut as Eva in Die Meistersinger von Nürnberg at Oper Leipzig and most recently as Els in Der Schatzgräber at Deutsche Oper Berlin. Next season, Elisabet Strid will perform Salome at the Royal Opera, Senta at the Royal Opera House in London and Chrysothemis at the Royal Theater in Copenhagen.

Christina Nilsson, soprano, was named the winner of the Renata Tebaldi International Voice Competition 2017. In the 2017/18 season, she made her big breakthrough with her acclaimed role debut as Aida at the Royal Opera. The following season, she sang her first Ariadne in Strauss’ Ariadne at Naxos at the Frankfurt Opera, which was followed by the same role at the Lausanne Opera in Switzerland. The 2021/22 season began at the Tiroler Festspiele in Austria, where she played the role of Elsa in Lohengrin, a role she previously sang in Opernhaus Dortmund. Christina will return to the Royal Opera this autumn for the premiere of Ariadne on Naxos. Christina Nilsson received the Birgit Nilsson scholarship in 2015.

Oksana Kramareva, soprano, comes from Ukraine and is associated with the National Opera in Kyiv, where she performed roles such as Tatjana in Eugen Onegin, Lisa in Pique dame, Leonora Il Trovatore, the title roles in Aida and Norma and Abigaille in Nabucco at the Ravenna Festival under direction by Riccardo Muti. She has visited opera houses in Germany, Spain, Japan, Portugal, Canada and Russia, including the Mariinsky Theater in St. Petersburg. Petersburg and performed several roles at the Aalto Theater in Essen. At Malmö Opera, she has previously appeared with the title role in Aida and Amelia in Un ballo di maschera. June 2022 she sings Aida at Badisches Staatstheater Karlsruhe.

Taras Shtonda, bass, comes from Ukraine and has been a soloist at the National Opera in Kyiv since 1992. Among other things, he has sung the title role in Boris Godunov at the Bolshoi Theater in Moscow, Wotan in Die Walküre at the Mariinsky Theater in St. Petersburg. Petersburg and Pimen in Boris Godunov at the Savonlinna Opera Festival. At Malmö Opera, he has sung a number of roles, including in Hoffmann’s adventures, Gurnemanz in Parsifal, Ramphis in Aida and Prince Gremin in Eugen Onegin, a role he also performed at the Glyndebourne Festival. In March 2022, he participated as Fafner and Hagen in the Ring production at Oper Leipzig and Gurnemanz (Parsifal). June 2023, Tara’s Shtonda makes her debut as the Grand Inquisitor (Don Carlos) at Covent Garden.

Alexandra Büchel, soprano, has performed roles as The Blind Poet in Blomdahl’s Aniara at Malmö Opera, Madeline in Usher at the Folkoperan and with Opera Ballet Vlaanderen, Gepopo in Le Grand Macabre, Coloratura Machine in Carl Unander-Scharin’s Sing the body electric and Agnes in the premiere of Catharina Backman’s The Floating Lady at Malmö Opera. In 2022, she played the title role in Martin Lisell’s newly written opera Nobody about Charles Manson’s life. Alexandra has also been involved with NorrlandsOperan, Vadstena-Akademien, Kammeroper Schloss Rheinsberg, Cape Town Opera in South Africa, Landestheater Gera and Theater Altenburg in Germany. Alexandra Büchel received the Birgit Nilsson scholarship 2017.

Fredrik Zetterström, baritone, has been involved in most Scandinavian opera houses such as the Norwegian Opera, the Royal Theater in Copenhagen, the Jutland Opera, the Gothenburg Opera, Malmö Opera, Norrlandsoperan, Vermland Opera, Folkoperan and Opera Hedeland. In 2012, Fredrik Zetterström made his debut at the Royal Swedish Opera as Scarpia in Tosca, where he later that year did Renato in Un ballo di maschera. Among the more profiled roles are Wozzeck and Rigoletto at Norrlandsoperan and not least Lear, the title role in Aribert Reimann’s opera at Malmö Opera. He has also participated in the premiere of several newly written works. Fredrik Zetterström received the Birgit Nilsson scholarship in 2013.

Evan Rogister is active as the first conductor at the Washington National Opera as well as for the Kennedy Center Opera House Orchestra. With Trollflöjten, he made his debut in the 2017-18 season at the Metropolitan Opera in New York, to which he then returned. In 2018-21, he led the first complete performance at the Gothenburg Opera of Wagner’s Der Ring des Nibelungen. He has conducted Tannhäuser and Rienzi at Deutsche Oper Berlin, Die Hochzeit des Figaro at Malmö Opera, Lohengrin, Eugen Onegin and the ceremony for Birgit Nilsson Prize 2018 at the Royal Opera and André Previns A streetcar named Desire at Chicago Lyric Opera and L.A. Opera.

Helsingborg Symphony Orchestra (HSO) consists of about 60 musicians and gives about 75 concerts a year, mainly on its home stage Helsingborg Concert Hall, but also regularly around other stages in and outside Helsingborg. Chief conductors in recent times have been Hans-Peter Frank, Okko Kamu, Hannu Lintu, Andrew Manze and Stefan Solyom. At present, HSO plays its concerts with various guest conductors. HSO is frequently represented on record and has received several awards.

Mark Levengood was born in the United States and grew up in Helsinki. As a 19-year-old, he came to Sweden where he studied at the Dramatic Institute’s radio producer education. From the 90s, he made his own programs for SVT followed by major productions such as the Guldbaggegalan, the Melodifestivalen, the broadcasts on Crown Princess Victoria’s birthday and for the wedding broadcasts in 2010. He also participated in SVT’s broadcast of Princess Madeleine’s wedding, as well as Prince Carl Philips’ wedding. Mark Levengood is a diligent columnist in Swedish Radio, active as a writer and has created the performances Mark and his world and Sound of Mark. Since 2008, Mark Levengood has been one of Unicef’s ambassadors.