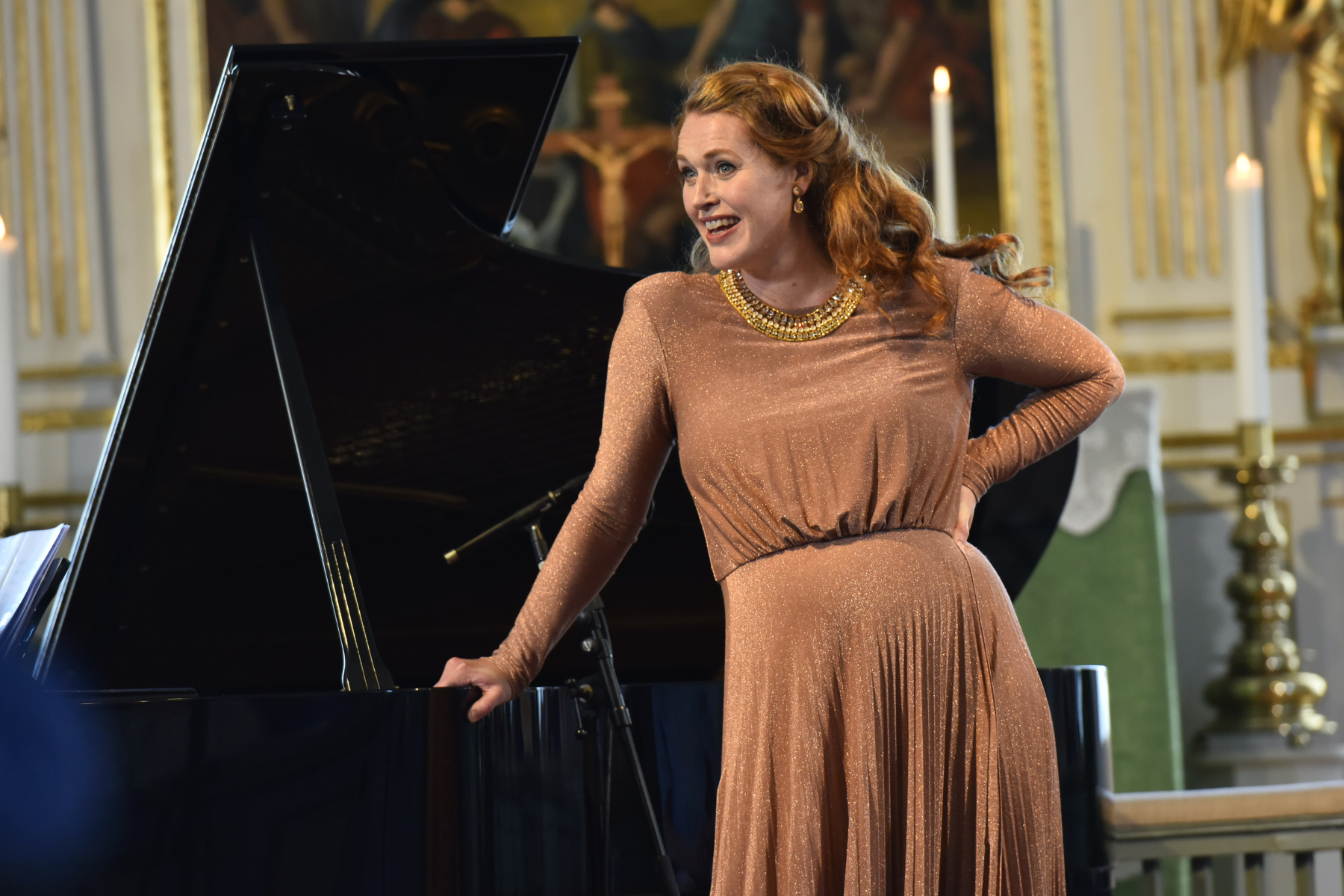 Germany’s Concerti Magazine experiences the Birgit Nilsson Days: “The legendary high dramatist Birgit Nilsson was deeply rooted in her southern Swedish homeland of the Bjäre peninsula. The festive days dedicated to her on her ancestral farm bring her spirit alive.

Senta in the cow pasture

The legendary high dramatist Birgit Nilsson was deeply rooted in her southern Swedish homeland of the Bjäre peninsula. The festive days dedicated to her on her ancestral farm bring her spirit alive.

On this very special evening in Birgit Nilsson’s southern Swedish homeland, there is a lot of laughter, although only opera tragedies from the pens of Verdi, Wagner and von Weber are on the programme of the festive concert. Of course, the locals, almost 2000 of whom have come to the large car park right next to the estate of Birgit’s grandfather and father, know how to behave in opera matters. But before the four parts of the programme, host Mark Levengood contributed so many anecdotes from the life of the legendary high dramatist that La Nilsson seemed wonderfully present in her unique and disarming (and sometimes self-deprecating) humour.

Brünnhilde’s grip on the ground

The future Wagner heroine was born, grew up and put down roots here on the “Heile Welt” peninsula of Bjäre. From here she started one of the greatest and longest careers in the hefty Wagner and Strauss repertoire, and here she returned all too gladly, felt connected to the down-to-earth people of the countryside, remained one of them, was never warped by the glamour of the Metropolitan Opera and the hymn-like adoration at the Bayreuth Festival. In opera circles people rave about La Nilsson with reverence, here at home she is and remains simply Birgit, who as a farmer’s girl became Brünnhilde and conquered the world of opera. That’s how down-to-earth she is.

This contradiction of world career and down-to-earthness, so ideally resolved in her personality, is also breathed in the museum that has been dedicated to her, which comprises her childhood home, preserved in its original state, as well as two converted stables that serve as exhibition space and coffee house – in the latter you can enjoy the deep-chocolate and richly coloured speciality from Birgit’s baking book, which can be called either a diva cake or an “Aida” cake. Once a year, however, the Birgit Nilsson Museum organises the Birgit Nilsson Days, which always take place in mid-August, i.e. at the end of the Swedish summer holidays in this vacation idyll, and brings together all the beneficial activities with which the artist, who died in 2005, wanted the future of singing, opera and classical music to be built on. In a final concert, the participants of a master class present themselves to the audience, having worked for a week with a great singing personality – this year with the soprano Hillevi Martinpelto. Then, the young star who has been awarded a one-year stipendium gives a lied and opera recital – this time the youthful, dramatic Wagnerian maiden Cornelia Beskow. And in the festive concert on a gigantic open-air stage specially set up for the occasion, even more mature former stipendium holders and prominent guests give a gala performance as the finale. This year, a programme of cross-sections from four operas with which Birgit Nilsson herself made her debut as a young singer in Stockholm. These were by no means normal beginner roles, however, but rather heavyweights of the 19th century. Nilsson first sang Agathe in “Der Freischütz” in October 1946, and in subsequent years Lady Macbeth in “Macbeth”, Amelia in “Un Ballo in Maschera” and Senta in “Der fliegende Holländer”.

The Nordic School of Singing

It was exciting to see in the concert whether the Nordic school of dark and warmly shimmering dramatic voices embodied by La Nilsson and her former and present colleagues such as Flagstad, Nilsson’s classmate Varnay, Stemme or Davidsen could also be seen to continue here. After all, two of the four dramatic sopranos in the concert are Swedish. Elisabeth Strid, currently probably the leading role representative of Sieglinde alongside Lise Davidsen, indeed has Nilssonian qualities. Her Senta, sung right next to the cow pasture, has jubilant aplomb and rapturous upsurges, but also girlishly touching moments, but above all Strid demonstrates a naturalness of expression in the ballad through which her singing goes straight to the heart. Christina Nilsson as Agathe shows with Agathe’s “Leise, leise, fromme Weise” that she is not a descendant of Birgit despite the surname similarity – and yet is rightly making a great career for herself. With her, the dramatic expansion comes entirely from the lyric, she plays technically virtuosic with her perfectly built voice, but her primary use of the head voice resonances makes her soprano clearly brighter and thus less Nordic shaded than that of her colleague.

Highly dramatic in the classical sense is the Ukrainian Oksana Kramareva, who as Lady Macbeth in “Vieni! Affretta!” relies on the triumphant furore and wild power of her soprano. Beirut-born Joyce El-Khoury, on the other hand, conquers Amelia from above, as it were: with the honeyed height of her beautiful soprano, which does not yet know spinto sharpness, but fine creamy charm. Among the gentlemen of creation, the non-Swedes have the edge this evening. The Ukrainian Taras Shtonda is a picture-perfect bass. As Verdi’s Banco in “Macbeth”, he doesn’t have to roar, instead he creates a differentiated sound and takes his imposing voice back. As Wagner’s Daland, he not only weighs the words perfectly and recalls the Singspiel tradition of his character with comedic skill, he casually exudes all the power of a genuine (and now rare) basso profondo. And this gala in memory of La Nilsson brings us another real discovery: Jonathan Tetelman. Just as Nilsson once tried to teach the then young Domingo the art of the high trumpet notes in Puccini’s “Turandot”, so now a hopeful representative of the Italian subject is on stage here as the hormone-driven Gustav III. The Latin lover type, born in Chile and raised in the USA, has the languorous melting in his voice, the proud attack in the high notes, the joy of phrasing charged with a precise understanding of the text – and that little bit of propotence that once belonged to Puccini’s and Verdi’s heroes but is now increasingly being questioned. It will be exciting to follow how this highly gifted singer – with a fresh contract from Deutsche Grammophon in her pocket – will develop.

But the concert is so much more than a summit meeting of great voices. Maestro Even Rogister and the Helsingborgs Symfoniorkester create a palatable undertow and theatrical density, and together with the choir collective of local singers they close a circle that makes the concert at the authentic venue a family reunion: Birgit Nilsson once emerged from the tradition of the local church choirs, she received her first vocal training in the neighbouring parish of Båstad, this is where she was discovered. And it is here that the spirit of singing as a natural form of communication is still felt today. It is no coincidence that Nilsson has included in the statutes of her foundation the requirement that the stipendium holders she supports must also excel in the interpretation of a Swedish folk song.